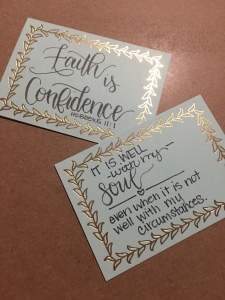 I like the above quote, “it is well with my soul even when it isn’t well with my circumstances.” And, I’d like to sit here and tell you I’m living that quote, but I’m not. It hasn’t been well with my soul since about Tuesday, and it got so much less well (is that even English?) on Thursday.

As I do, when I am by myself, I think…maybe too much. And so tonight I’m thinking through it all and wondering why, after all these years, it probably hurt more this year than any other year, yet another year without my dad.

I was good until Tuesday. Tuesday I woke up and did not want to leave my house. I just felt an overwhelming sense of…something. A heaviness I can’t explain. But I had to set up for Bible study on Tuesday and so I made myself leave my house and do the things. But as I sat there, I more and more just wanted to leave. (No offense to those people. It was me.). As it mercifully ended and I gathered up my things and went home, I began doing the other thing I needed to do, packing. But about an hour in, and I just didn’t care about that either and took a nap instead.

As I woke up I remembered an obligation to do something with my people that night, and I just didn’t want to. (To tell you the depths of it, it was basically a craft night. I’m buying a house with an entire room for crafts.) And I love my people. But I dreaded it so much. One person was coming to my house after work because it was closer to the location of the activity, and that’s the only reason I didn’t bail completely.

That night as we drove back to my house, me completely in my head trying to figure out why I felt this way, the date clicked and I knew I was in trouble. Before she let me out at my house she said, “see you on Sunday” and I said something like don’t let me not come. She kind of laughed and I said, “no, for real, because I’m not going to want to.” She of course wanted to know why and not having been running dates in my head with me, she had no clue. “It’s October 21…the anniversary of my dad’s death. And I think that’s what’s wrong with me now. So make me come. Ok?”

Looking back now, I had no idea what Thursday would bring, but I know God being who He is (and me being who I am) knew it was about to get ugly and I was going to need backup, so that conversation laid a groundwork.

Thursday was fine at first. I was having an ok day. I liked the people I worked with that day. I liked my patients, and while it was hectic in the morning, I still felt in control (which you know by now is key to my happiness) and the jokes were flying and it was crazy but good.

And then suddenly it was a bad crazy, and there was no more control and the train derailed in about 15 seconds and…so many things. (And basically read my previous blog post titled “Perspective” and take it out of 1982 and into 2018 and that was Thursday afternoon.).

And my heart was broken for someone I met 6 hours before and for the me I was 36 years ago. I tried to hold it together, and did pretty well for a little bit. (I mean there was some well placed bathroom tears, but then game face…kind of.). My boss walked by and said, “do you want to talk about it?” And I said, “nope.” And thankfully because she was my friend before she was my boss just let that stand.

But it only stood for a little bit before I couldn’t anymore and walked into her office and she shut the door right behind me and I sobbed about all the things. And because she’s my friend, she already knew all the other things I didn’t have to say.

And I said, “I don’t know if I can do this again tomorrow.” And she said simply, “don’t”. And I didn’t. And Thursday night and most of Friday I cried…for my patient, for his family, for me and for the 5 year old me and for all the ways the situations were similar. For the fact that I could no more control the outcome now at 41 with medical training than I could at 5 with barely the ability to write my name.

Because even at 5 (6, 7, etc) I always tried to figure out what I could have done different to change the situation. I didn’t talk about it because I successfully shut people out, even as a little kid, but I thought about it a lot. (And either that’s where my control problems began or got magnified, likely.)

But this time was different because God gave me people. Thursday evening I kept thinking I need to ask my people to pray for me because I don’t know what to do. But I stopped myself because I didn’t want to bother people, or sound weird, or be dramatic. But after I’d been home from work, crying, for about an hour, I finally got the courage to send that text. I don’t know why it takes courage to ask for help or admit you don’t have it together but it does, for me anyway. I didn’t give details. I didn’t say much, just pray for me, to which I received all the responses that they would.

One of them asked if I wanted to meet for coffee. I said no (basically because I’d just cried all my makeup off and looked the way you do when you cry, which is neither lovely nor attractive and I hadn’t admitted that it was that bad.). I said I was going to bed, which would have probably been a good idea. Only I didn’t. I stayed up and cried and watched “Dancing Queens” on Netflix…(not that I would recommend that or anything.)

The next morning she asked if I went to work and I said no. But I was going to go to the bank and wire the closing money for my house since I should do something productive. Then I came home and cried off all the makeup I put on that morning. (Actually, to be fair, I took it off so it wouldn’t get on my pillow case.).

Later that evening she came and made me leave my house and took me to dinner (nearly got me crying in McAlesters which would be public crying which is another level of Dante’s inferno in my life) and took me to the furniture store (the one that I couldn’t manage to get out of the car for earlier that day by myself). She just was there and still loved me well through all the broken, when I wasn’t fun to be around and wasn’t pretending to be, in the deep dark hole I had dug myself into, and she sat there with me, didn’t make me talk about it or try to rescue me, and just was there.

One of my friends from work called me that day too (because we’re like a dysfunctional family sometimes and they knew I wasn’t physically sick) and I sobbed more.

“You did everything you could, you know.”

And I asked the question earlier, why does it hurt more this year? I think I have an answer. Because in this season, for the first time, I stopped evading the pain.

For the first time in 36 years, I allowed grief. Thursday’s events took it so much further, but I feel like right now, in this moment, I can move on from it. That I won’t be stuck in this season of grief forever. That while tonight I’m still sad, it’s not the weighty sad it was last week and even this morning and afternoon. It’s sadness because of all the things I never got to experience and do with my dad, but it’s also remembering all the places God has brought me through and the ways He’s been kind to me, even in this last week.

My friend did not “make me come” today but strongly and gently, like she does so well, encouraged me to come. She knows how to love me well when the broken crazy gets to be a lot. She also told the story so I didn’t have to, and for that I am also grateful. She told another of my people who also sent an encouraging message, and while I didn’t respond (sorry. I was trying to hold it together) I hope she knows I appreciate it too. And all the ways she loves me well.

I did go today. I didn’t want to but I did. And at first as I sat there staring out the window so very much wishing I was at home because I felt bad that my broken was ruining a special time, they still loved me well. And while I still don’t know how to ask for help and I’m not good at accepting it either without feeling selfish, I know God gave me these people as a gift. And that somehow they get me in a way that I don’t even get me. And they can reach through all the things and still love me well. Even after a week like this. And if it’s possible love me even better because of a week like this.

I pray that God gives me the grace to know how to love them well, too.

And I feel like there’s a possibility that tonight the season is changing. As sometimes summer slowly drifts into fall (unless you live in Oklahoma and then you go back and forth a few dozen times), this season with all its hard and all its learning is easing into the next. I’m grateful for the hurts and the lessons of this season, the limp and the blessing, but I’m so ready for the next. I hope it’s a good season, but even if not….He’s still good.

After all, you appreciate the spring more after a good, hard winter.

1 thought on “The limp and the blessing”