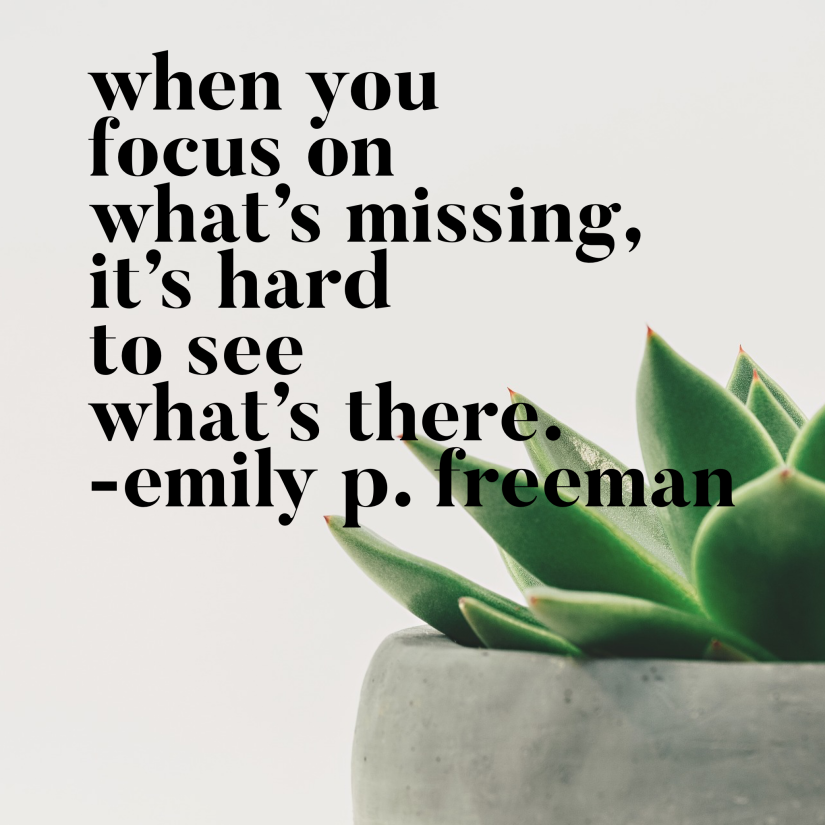 First, let me take a minute to acknowledge that I took last week off from writing. I even got a few questions about it. For some reason, last week was just a week to exist and not contemplate much of anything. It definitely had its rough moments. I’m still learning to navigate this place I find myself. But here we are and here we go.

I am a part of an Instagram writing challenge that goes with The Next Right Thing by Emily P. Freeman. (Granted, I haven’t done a lot of them but I’m giving myself grace in those kinds of things lately). Each prompt goes with a chapter of the book, which is a great book if you’re looking for something to read. Today as I read the chapter and thought about the prompt, I thought I may have more to say than an insta-caption would easily fit. Also I thought again how I hadn’t been here in a week or so, so what better way to do both.

Today, Day 10, the prompt was “Quit Something”. As I thought about it, I began to wonder what I should quit. I used to be a person who rarely quit anything. In fact, I’d hang on to the bitter end. I blame my mother (just kidding, mom).

Growing up though, we weren’t quitters; if you were going to start something, you were going to finish it. When I started piano, it was with the knowledge that I couldn’t quit until I could play out of the hymnal. (It’s a lot of years between “Hot cross buns” and “How Great Thou Art” but I made it.). I liked piano (and still do), but there were times, mainly when theory was involved, that I wanted to quit. But since I couldn’t play out of the hymnal yet, I pressed on, theory and all. (Theory is key signatures and mechanics of piano and involves a lot of paper and pencil things. Also, there was a contest that I didn’t get to advance in because I failed the theory part. Whatever. Theory I hate you.)

There was one time I remember being allowed to quit something though. Literally this is the only time I remember in my childhood the discussion that “if you want to quit, I think it’ll be okay this time”, complete with an explanation of why this was an exception. Soccer. I played soccer a couple of years. When it was an all girls team, it was fine. It’s not my sport and I don’t love it, but it was ok. (I kind of felt the same way about soccer that I do about basketball…casual indifference. It’s fine. I don’t love it. Softball was my love…but that’s a different story).

One year, they decided, for whatever reason, to take soccer co-Ed, that means we had boys on our team. Or, maybe they had girls on their team. It didn’t matter to me when I heard. But apparently, clearly, it mattered to the boys. Several of them decided if they played really rough and hurt enough girls, they would let them go back to their all-boys team. It was brutal. So my mom let me quit…clearly for my own safety. (This also changed my opinion of soccer from apathy to complete disdain, and kind of explained my reaction when my niece took up soccer one time. Ugg.)

That’s it. That’s the only time I remember quitting. It might even be part of the reason I’ve worked for years at every job I’ve had. We don’t quit, (which is actually probably good cuz I wanted to quit so much every so often.)

One of the areas I need to quit is looking back at the past and wishing I could change things. Do you ever do that? Man, next time I’m gonna do that different, only there’s not a next time usually because we only get one life.

There’s an app called “TimeHop” and it can be fun sometimes. It pulls up your posts from Facebook and Instagram over the years, a “this day in history” kind of thing. I frequently take videos and pictures of my three nieces and seeing old ones come up through the years is a fun trip down memory lane. But sometimes, there are events and statuses that I wish I could have changed. This particular couple of weeks and following may be riddled with those kind. Because we are approaching a year on a decision that I’m still not 100% sure was a good one in some ways.

The statuses have already started coming back. Pre-op things. And I know this week marks the year point. The surgery that really started this blog and changed a lot about me. It’s taken me down some hard roads. Regret is a hard word to assign to it because I don’t regret the decision really. I just don’t know always that it was the best one. It still feels a little like I gave up on a life I could have had, even though I know cognitively that it didn’t do that at all. That life would never have been mine, but deep down I still have mixed feelings.

Yet, this is where I need to quit. I need to quit living in the past. The decision was made and in a lot of ways it has made my life so much better. If I could go back knowing now what I know, I’d likely make the same decisions again. The fact is, though, I can’t go back anyway. So I need to press forward and embrace the life I have. Is it different than I wanted? Maybe. Ya, I mean, it probably is. But it’s a good life still. I need to look at the blessings in the present because they are many. I need to stop focusing on what is missing from what I pictured my life to look like and embrace what is actually here. Embrace the good life I lead with friends and family that support me in all the things.

This year has changed me. But it has changed me in so many good ways too. It has made me realize things about myself, good and bad. It has brought about change and growth. It has come with some set-backs and challenges. All the things together are molding me into the person I’m supposed to be and for that I am grateful, even in the hard and the unmet expectations.

This year has brought me people, my people who love and support me in all the things, even in the hard. It has challenged my relationship with myself and with my God. It has brought me to the place where I lean into His words often to find truths in a way I never have before this year. I can see growth and change. I can see the negatives, sure, but they are just another thing I will be stronger for overcoming.

I have a God who doesn’t quit on me. And as He continues to mold and refine me, I lean in, knowing that refining takes fire and fire is rarely comfortable. But in the end….it’s so much better than I could have imagined.

This. My friends. This is the sweet spot.