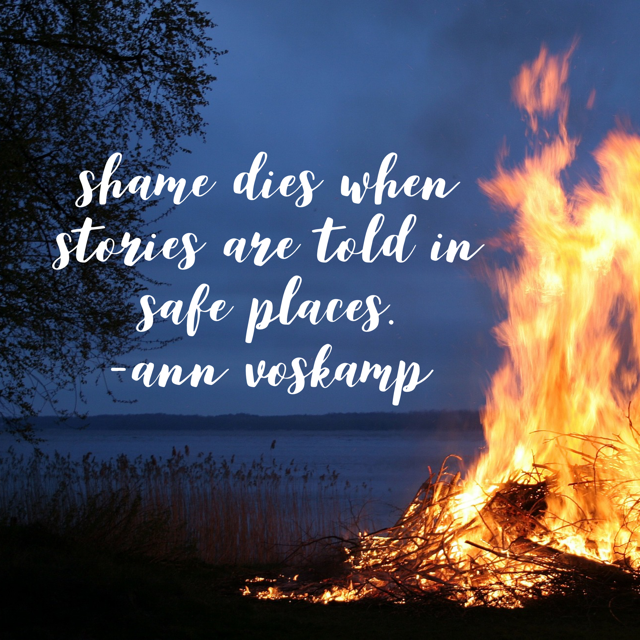 So I was thinking about shame. I know. I know. It’s a weird topic to think about. But really this is how it started. I was thinking about why we don’t talk about things that we struggle with. I mean really. If you break your arm, you have to talk about it because it poses several problems. First, you probably have at the very least a brace on it, so people are going to ask questions. Second, you may struggle to do all the things you normally do, so you’re going to need help, right?

But when it comes to internal struggles, the things that are sometimes not so obvious on the outside, we hide them as best we can. We wash our face and put on the mask of perfection and hope no one notices that inside we are falling apart. We don’t ask for help because that would be admitting that something is wrong. We don’t talk to even those closest to us sometimes because we don’t want to bother them or we don’t want them to think less of us. Those are all the reasons I have avoided it anyway, so I have to think you might be the same.

If I am struggling, then I can’t be useful. Oh boy. That’s a kicker for this enneagram 2. If I can’t be useful, then I’m worthless. If I’m worthless, then…. It’s a really quick, downward spiral. It may end up with us being more broken than we started out with because our brains took over and made it 100 times worse. (Or, maybe I’m the only one…but I doubt it.)

I have friends. I have amazing friends actually through no outstanding effort of myself but because God gifted me abundantly in this season. He knew what I needed before I even needed it. These people speak truth into my life at almost every opportunity. They rarely miss an opportunity to speak life to me.

A statement that one of them told me once is something that I have clung to in this season of brokenness and self-growth. “If we know where you’re broken, we know how to love you better, friend.” Yikes. I can find love in brokenness. I deserve love in brokenness. Those are heavy truths if you really think about them. But the fact that they are truths should not be disputed.

I’m not saying we should flaunt our broken or wear it as a badge of honor because it’s not. It’s a struggle. It’s not pretty. It’s not fun. But what we should embrace and celebrate is in the midst of that struggle, God loves us enough to pursue us. He knows in the deep down of our deep down that we are worth the effort. He knows that this broken place is somewhere He can shine through.

But guys, guess who else knows that? The devil is well aware that we are broken too. He knows if God gets ahold of our broken and heals us, it can be a place where His glory and majesty are celebrated. He doesn’t like that…not at all. He also senses weakness and knows, if he can get in there first, we are vulnerable in our broken. He smells blood. So he starts to go to work.

And shame is born. He pokes our broken. He highlights our broken. He says to us, “oh yikes, that’s bad. I can’t believe that’s how you are. No one will ever understand or want to help you with that. No one will want you now.” And we believe him because he’s loud and in our broken he makes sense somehow. And if we are caught alone in our broken, he’s got us even more.

But by not talking about it, by hiding it, by trying to pretend at the perfection game, we give the broken (whatever it is) a stronger voice. We give it more power. We feed it. And it grows and becomes bigger in our silence.

And that’s why I talk about it. Because that’s how I fight my battle. Because silence broke me. Because I could have let God into the broken so long ago and saved so much pain and consequences, but I am stubborn and silent in embarrassment.

I’m not saying you need to announce to the world that you’re struggling. Maybe that’s not your battle plan. But friend, you have to tell someone, even if it’s just one someone. Don’t battle in silence and shame. Don’t hide behind perfection. It’s not worth it and it’s so fragile that it cracks eventually. But don’t give whatever it is power in silence. Speak it outloud to someone you trust. Call it out. And let them help you in your broken. And speak it out to God becasue friend, He’s just waiting for you to do just that.

Here’s the funny part. I hid from my battle for years because I didn’t want to deal with the stigma of admitting that maybe my brain was a little broken. But once I couldn’t hide it anymore and once I started talking, the me toos were so many. My friend group of strong, mighty women of God came along and said, I’m sorry you’re struggling because I’ve been there and I struggle with that too.

So why do I think my people wouldn’t think the same of me. Because I am my own harshest critic. Because the devil wants it silenced. The devil wants me to believe that God cannot use this. The devil wants me to hide in shame. The devil knows…when God works in these situations people take notice. God’s power is magnified. My heart is stronger for Him. And I go from fighting my battles to fighting for others in their battles. And together, we are too much for the devil to handle because he doesn’t like to lose.

Anxiety is hard. Some days it’s better than others and I fight for me and the me I will one day be. And I fight for those around me who are looking to see if I can beat this devil. Here’s what you should know. I can’t. I can’t beat this devil. He will always win….BUT GOD. I invite God into the fight and He sends His army (which includes some of my favorite people) and we fight this battle. And then, friends, guess what….the devil finds out he doesn’t win. He hates that. And it’s amazing.

1 thought on “We don’t have to be ashamed”